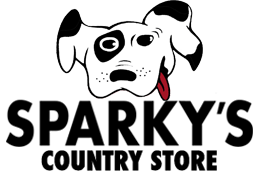 Your Home for Fireworks, Candied Pecans and Gourmet Pecans

Sparky's opened operations in 1990, in Marion, SC along Hwy 501, the main thoroughfare heading in and out of Myrtle Beach South Carolina. Randall & Linda Small, Sparky's founders, had a vision for the business to be a family friendly tourist stop much like South Of the Border or Midway Travel Plaza. To everyone else, that vision seemed like a far fetched dream. The building that housed Sparky's was old and dilapidated. The roof was full of leaks and the floor was uneven and riddled with dips. However, the two knew the location was good and that with hard work Sparky's could be a success. Upon opening the doors the customers were few and far between. Without much money to invest the selection of merchandise was limited. Some drinks & snacks to offer travelers, along with pecans and fireworks were the mainstays of the business. The slow days turned into months and after much scrounging and saving they figured they could afford to advertise their business on a billboard. The billboard worked wonders. The advertising paid off and business doubled.

They knew in order to grow the business they had to further invest in advertising. Every dollar made was put back into the business either through merchandise, building repairs, or signs. After a couple years, Sparky's had so many signs that the whole exterior of the business looked like a conglomeration of billboards and advertisements branding Sparky's logo. Nearly every two or three years since the first billboard the store has seen an increase in size. Sparky's now boasts an over 20,000 square foot gift & gourmet candy shop, a 5000 sq. ft. fireworks showroom, a gas station & restaraunt. Sparky's is now what Randall & Linda envisioned. Sparky's is a major stop for travelers leaving Myrtle Beach in the summertime, and is widely known as a family friendly place to shop.